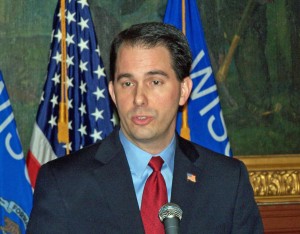 Governor Scott Walker has issued an executive order allowing Wisconsin National Guard members to carry weapons while on duty. It’s a response to the shooting deaths of five service members by a gunman who had links to Islamic extremism, at a pair of military installations in Chattanooga, Tennessee last week. One of those killed was Sergeant Carson Holmquist, a Marine from Polk County, Wisconsin.

“Safety must be our top priority, especially in light of the horrific attack in Chattanooga,” Governor Walker said. “Allowing our National Guard members to carry weapons while on duty gives them the tools they need to serve and protect our citizens, as well as themselves. I am also directing Adjutant General Donald Dunbar to evaluate longer-term plans to ensure the safety of our service members.”

Walker also commented on the Chattanooga shootings during a stop in Iowa last week, as part of his presidential campaign.

“I think the federal law that prohibits our heroes, our men and women in uniform, from being armed at places like this recruiting center needs to be changed, so that they can protect themselves,” Walker said Friday in Cedar Rapids.