You are here: Home / News / Walker heads back to Iowa 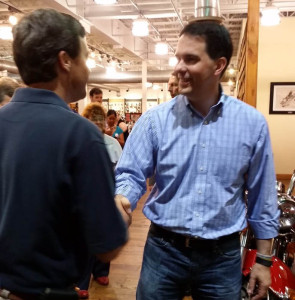 The Republican governor hit the road Tuesday, a day after announcing his presidential bid during a rally in Waukesha, with stops in Nevada, South Carolina, and New Hampshire. This morning in Davenport, Walker started a tour of Iowa, where he’ll be making multiple stops while traveling in a Winnebago.

Walker said “we’re going to enjoy this and it will be nice to finish up Sunday in Plainfield Iowa, where I live for about seven years as a kid.”

The governor lived in Iowa before his family relocated to Wisconsin, where he grew up in Delavan.

Walker has been at the top of the polls in Iowa for most of this year, something he attributes to his win in a recall election three years ago. “Winning that, and then being the number one target last year, just shows what lengths the left will go to…yet, in every one of those instances, we prevailed.”

Walker is expected to continue his national tour next week, as he tries to build support to win the Republican Party’s presidential nomination for the 2016 race.