You are here: Home / News / Walker signs budget in Waukesha 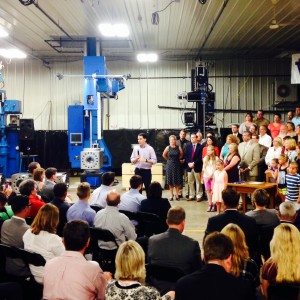 Wisconsin Governor Scott Walker signed a $72.5 billion state budget at a Waukesha factory on Sunday, saying “the taxpayers come first” in the two-year spending plan. “I’m proud to say that property taxes in December of 2016 will be lower for typical homeowner than they were in December of 2010,” Walker said. “Who else can say that in America?”

Walker will rely on his record as a tax averse governor as he starts his presidential bid. He’s back in Waukesha on Monday afternoon to officially announce his long-anticipated entry into an already crowded field of Republican presidential candidates.

Walker touted the taxpayer-friendly aspect of the budget plan before signing on the factory floor at Valveworks USA, a firm which manufactures high pressure components used in mining machinery. “We did it without income tax raises, we did without sales taxes, we did it without gas taxes or a vehicle registration fee,” Walker said.

Those last two points are a major reason why the state’s ongoing shortfall in transportation funding will go unresolved for another two-year budget cycle. While Walker noted that the overall level in bonding contained in the budget is the lowest it’s been in years, part of the reason for that rests with decisions by Republicans on the Joint Finance Committee. The budget panel reduced Walker’s original request for $1.3 billion in borrowing for road projects by some $450 million.

Walker used his veto power 104 times – twice as often as before. Joint Finance Committee co-chair, Senator Alberta Darling (R-River Hills), said Sunday that she hadn’t seen the vetoes, and hadn’t weighed in on what the governor ought to have vetoed. “The governor’s job is to veto what he thinks is not appropriate,” Darling said.

Democratic legislative leaders were critical of the Republican budget. “While we are taking time to look over Governor Walker’s extensive vetoes one thing remains clear — this budget is not a budget for the people of Wisconsin,” said Assembly Minority Leader Peter Barca (D-Kenosha). “This Republican budget throws the people of Wisconsin under Governor Walker’s campaign bus as he is en route to Iowa, New Hampshire and other primary states to launch his presidential run.”