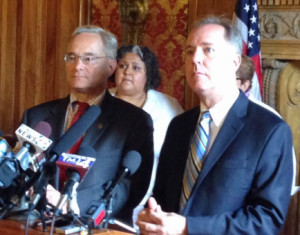 The Wisconsin Assembly has approved a financing plan for the state’s share of a new Milwaukee Bucks arena. Tuesday’s 52-34 vote on the measure already passed by the Senate now sends the bill to Governor Scott Walker for his signature.

“While the taxpayers are still playing a role, they are not playing the most significant role for the state,” said Assembly Speaker Robin Vos (R-Rochester), who said the funding represents package represents a good deal for taxpayers by keeping the NBA team, and the revenues it generates, in Wisconsin.

The league has made it clear that failure to approve the arena project would clear the way for the team to move, with Seattle and Las Vegas as likely designations.

Minority Leader, Representative Peter Barca (D-Kenosha) said it was time to act. “Why wait? We were working aggressively to try to get to yes. I think most people agree it’s a good thing for the Bucks to stay here. Now the taxpayers are fully protected,” Barca said.

The deal has the roughly $500 million cost of the arena split three ways between the state, the city and Milwaukee County.

None of the plans opponents spoke during the brief floor debate. Representative Paul Tittl (R-Manitowoc) said he remained undecided as recently as Tuesday morning. “It actually comes down to very simple math,” Tittl said. “If we invest $3.5 million dollars a year, we’re going to get $6.5 million back,” Tittl said.

“LeBron James, in the three says that he works in Wisconsin, pays more income taxes than 95% of Wisconsin residents,” said Representative Dale Kooyenga (R-Brookfield), who also asked that the Bucks “create an organizatin that recruits players that are role models for our young people.”