You are here: Home / Crime / Courts / Wisconsin Capitol evacuated during budget debate due to bomb threat 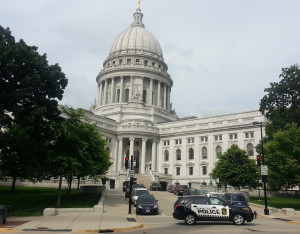 Capitol Police block access to the Capitol during a bomb threat. (Photo: WRN)

Just a little over four hours into the Assembly debate over Wisconsin’s biennial budget bill, lawmakers saw themselves forced out of the Capitol.

The Department of Administration cited a “credible bomb threat” in ordering an evacuation, which forced lawmakers, staff, media, and the public off the Capitol grounds for about two hours on Wednesday. Capitol Police searched the building, sounding the all-clear at about 5:30 Wednesday evening.

The delay resulted in lawmakers heading out to the many sidewalk cafes that surround the Capitol building. What had been a contentious debate just minutes earlier turned into a scene of bipartisanship, with Republicans and Democrats sharing tables and drinks together while they waited for the building to re-open.

Following the extended break, lawmakers returned to the floor, where debate on the state budget resumed just after 6 pm.