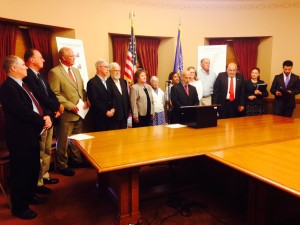 Calling it one of the worst instances of partisan gerrymandering ever, Democrats are challenging the state Assembly districts drawn in 2011 by Republican legislative leaders in Madison. “Wisconsin voters want fair elections, where every vote counts for something, and every voice is heard,” said Peter Earle, lead attorney for the 12 plaintiffs mounting the legal challenge.

Speakers at Wednesday’s Capitol press conference to announce the 30-page lawsuit filed in U.S. District Court in Madison were not limited to Democrats. “As a former Senate majority leader, I could have – heck, I should have – introduced meaningful legislation which ended partisan redistricting,” said former GOP state Senator Dale Schultz.

“We’re frustrated because we feel like our votes don’t matter,” said plaintiff William Whitford, a retired UW Law School professor. “We know our votes matter in statewide races, we know they matter in local races, but we know that when it comes to the state assembly, our votes just don’t matter.”

“This case is on track to go to the Supreme Court of the United states, after having been heard by a three judge panel,” said Earle. “This is a suit that challenges the partisan gerrymandering of the map, and we allege that it violates the 14th amendment and the 1st amendment.”

The district boundaries were drawn in secret, at the offices of a Madison law firm hired by GOP legislative leaders.