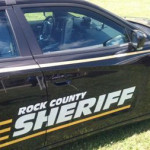 A 39-year-old man has died while in custody at the Rock County Jail in Janesville. The Rock County Sheriff’s Office said early Tuesday morning a Correctional Officer was alerted that Dante Tyreese Wilson of Beloit, who was an inmate in the Jail Medical Unit, was physically ill and displaying labored breathing.

The Jail Nurse and Correctional staff began performing life-saving measures until the Janesville Fire Department arrived to transport Wilson to a local hospital where he was pronounced dead. An autopsy is planned later today at the Dane County Medical Examiner’s office.