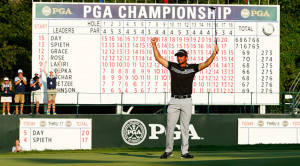 “We’ve played a lot of major championship rounds together and that was the best I’ve ever seen him play,” said Spieth.

Spieth entered the week having won the 2015 Masters and U.S. Open.  He was trying to win all three majors on American soil in the same year but fell just short.  Spieth did accomplish a major goal though.  With Rory McIlroy finishing in 17th place, Spieth took over the top spot in the World Golf Rankings.  It’s a position that McIlroy had held for 53 consecutive weeks.

“I accomplished one of my lifelong goals in the sport of golf,” Spieth said.  “that will never be taken away from me now.  I’ll always be a No. 1 player in the world.”

Day’s 20-under par total is one better than the previous low total in a major of 19-under, set by Tiger Woods  at the British Open.

Now we’ll what this win does for Day.  He is the skill to win “Multiple Majors”, but he’s also playing alongside some of the best in golf (Spieth and McIlroy).  All three together, have combined to win five of the last six majors.

AUDIO: Day on getting to a Major Record 20-under-par

AUDIO: Day says he had to win at the Straits :22