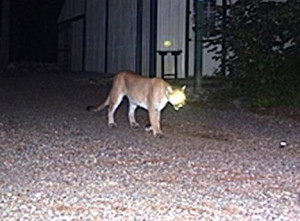 The state Department of Natural Resources has confirmed a pair of cougar sightings in Langlade County.

Both were captured by trail cameras on July 9, roughly six miles and 20 hours apart from each other. DNR officials confirmed the locations in the photos after they were reported within the past two weeks.

The sightings are just latest of several in the state this summer, including reports of a “large cat” or lion in Milwaukee and a Rock County park.

DNR officials say cougars have been known to enter the state as they disperse from breeding population in the Western US, but there is currently no evidence they are breeding in Wisconsin. The agency also notes that they are protected animals that can’t be hunted, and are rarely a threat to public safety.

Anyone approached by a cougar is encourage to make noise and throw rocks or sticks to scare it away. They are also urged to report any sightings to the DNR.