You are here: Home / Agriculture / Dry conditions persist across Wisconsin 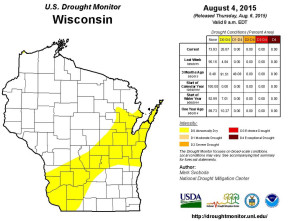 While the tail end of last week saw several parts of the state receiving heavy rainfall, dry conditions persist across a broad swath of the state.

As of last Thursday, the U.S. Drought Monitor listed about a quarter of the state as being “abnormally dry.” While it’s a far cry from the drought conditions seen in recent years, dry crops, brown grass, and dusty driveways are still the norm in many areas this summer.

The rains last week may have helped to alleviate some concerns. However, meteorologist Paul Collar with the National Weather Service says most of the state still needs moisture. Collar says it has been a pleasant, but dry summer, with some farmers being forced to rely on irrigation for their crops for the past four to five weeks.

The summer may not be the only concern either. Collar says the patterns of warm equatorial ocean currents are pointing towards another El Niño, which will likely affect the upcoming winter. It could mean less precipitation and warmer weather as we head in to the colder months of the year. Less snowfall means less soil moisture next spring, which could affect crops, streams, and lake levels in 2016.