You are here: Home / Brewers / Fiers no-hits the Dodgers (VIDEO) 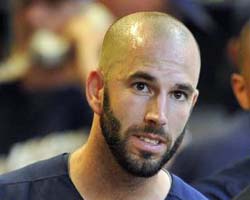 Former Milwaukee Brewers pitcher Mike Fiers tossed the second no-hitter in the major leagues in the last nine days, helping the Houston Astros to a 3-0 win over the Los Angeles Dodgers in Houston.

Astros executive Nolan Ryan, who has recorded seven no-hitters in his outstanding career, looked on from a suite as Fiers finished off the 134 pitch gem.  It was  the 11th no-hitter in Astros history.

Fiers (6-9) struck out Justin Turner to end the game.

Cole Hamels with Philadelphia, Chris Heston with San Francisco, Max Scherzer with Washington and Seattle’s Hisashi Iwakuma have baseball’s other no-hitters this season.

The Astros acquired Fiers in a  trade deadline deal with the Brewers.

Fiers had never retired a batter in he 9th inning in his five-year career.  He finished with ten strikeouts and  three walks and retired the final 21 hitters he faced.

It was the first no-hitter by one Astros pitcher since Darryl Kile blanked the Mets on Sept. 8, 1993.  Six Houston pitchers combined to throw a no-hitter against the Yankees on June 11, 2003.