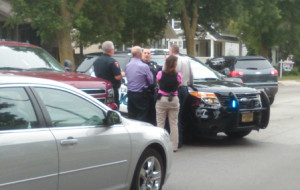 Police respond to the scene of a stand-off in Fond du Lac (Photo: KFIZ)

Fond du Lac Police dealt with two despondent men in separate incidents in the City Friday, with both being resolved peacefully.

First, a 19-year-old man made threats at a nail salon, prompting an employee to call police. The suspect had a handgun, but did not use it. Fond du Lac Police Chief Bill Lamb says his officers responded appropriately. He called it a “great example of some very highly dedicated, highly skilled police officers responding and very quickly taking control of what could have been a very dangerous situation.”

Later in the day, police blocked of an area of the city after a man claimed to have access to weapons and threatened to shoot officers if they approached where he was staying. Assistant Chief Steve Klein says the man was taken into custody after about two hours without incident. No weapons were found.