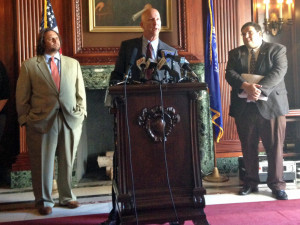 Republicans in the state legislature want to ban research in Wisconsin, using tissue from aborted fetuses, legislation which opponents fear could damage the biomedical industry in the state.

“As a society, it is bad enough that we allow millions of unborn lives to be ended. It is even worse that abortion providers profit off the sale of their body parts,” said state Senator Duey Stroebel (R-Saukville). The bill is a response to recent accusations that Planned Parenthood clinics have been selling tissue from aborted fetuses to researchers – although there’s no indication any such sales have occurred in Wisconsin.

While Republicans insist the bill would not harm the biomedical industry in Wisconsin, Dr. Robert Golden, Dean at UW School of Medicine and Public Health, said its passage would make Wisconsin’s law governing fetal tissue the most restrictive in the nation, and drive researchers out of the state.

“The word is already out on the street, that Wisconsin is not a place for science or biomedical research. We need to turn that reputation around,” Golden said.

The bill received a public hearing on Tuesday in the Assembly Criminal Justice and Public Safety Committee. Committee chair, Representative Joel Kleefisch (R-Oconomowoc), asked Golden what would happen to research if women stopped having abortions. “It would have a substantial negative impact on our capacity to do the lifesaving research that we are doing,” said Golden, who also told committee members that the polio vaccine would not have been developed had a similar law been in place.

“On our campus alone, cancers including lymphomas, stomach cancer, throat cancer and other diseases, have active, NIH supported labs working on promising new treatment approaches,” said Golden. “All of this will stop, if this bill is passed.”