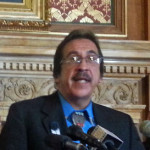 A Wisconsin tribe is voting this week on marijuana legalization. The Menominee Tribe in northeastern Wisconsin is voting Wednesday and Thursday on whether to legalize marijuana for medicinal and recreational use. “We continue to look for revenue sources,” said Tribal chairman Gary Besaw. “There are several we are looking at, this happens to be one.”

In January, Governor Scott Walker rejected the Menominee’s bid to open an off-reservation casino in Kenosha which tribe leaders say would have created thousands of jobs both on and off the reservation. “We’re not afraid to look at potential options,” Besaw said. “Menominee have been leaders in this way of thinking. If you’re elected here, you try in your best way to help your tribal members.”

Besaw said if tribal member vote in favor of legalizing marijuana, tribal legislators will begin figuring out how to navigate state and federal law to potentially make marijuana the tribe’s cash crop. Results of the vote will be announced Friday.

In December, the U.S. Department of Justice cleared the way for some tribal nations to decide for themselves whether or not to legalize medicinal or recreational marijuana. Tribe chairman Gary Besaw says the Menominee are the only tribe in Wisconsin which has this designation.

“We are the only reservation that the state does not have criminal jurisdiction over our membership,” Besaw noted, adding that this week’s vote is just the first step in a long process of determining how exactly legalizing marijuana could benefit the tribe.