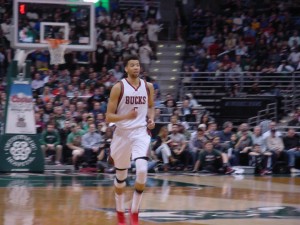 USA Basketball announced that Milwaukee Bucks guard Michael Carter-Williams is among the 34 players tabbed to participate in next week’s Men’s National Team Minicamp in Las Vegas.

The 34-player list includes 26 players on the National Team roster and eight players who are new additions to the 2014-16 USA Basketball National Team.

Michael Carter-Williams is one of the new members added to the roster.

The 2015 USA National Team minicamp will feature practices on Aug. 11-12, and the minicamp will conclude on Aug. 13 with the 2015 USA Basketball Showcase, a USA Blue versus USA White exhibition game at the Thomas & Mack Center.