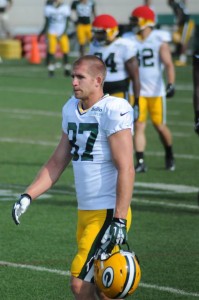 The Green Bay Packers may have to figure out how they’re going get to Super Bowl 50 without Jordy Nelson.  Coming off a career season in 2014, Nelson went down early with a knee injury in the Packers 24-19 loss to the Pittsburgh Steelers.  The injury took place without any defensive contact and he reportedly tore his A-C-L on the play, which would likely end his season.

Nelson will undergo tests this morning to determine the severity of his knee injury.

It would certainly be a devastating injury for the Packers.  He finished seventh in the NFL with 98 catches, fourth in receiving yards with 1,519 and tied for second with 13 touchdowns.  Nelson has 43 touchdown catches over the last four seasons.

Nelson has also become a leader off the field as well.  But with respect to Nelson, the Packers still have Aaron Rodgers.  He makes receivers better and will do so again if Nelson can’t return to the team this season.

It also appears as if second year tight end Richard Rodgers is ready to break out and have a big year, something the Packers didn’t have last season.  Who will stretch the field like Nelson did?  Maybe it’s Jeff Janis, or rookie Ty Montgomery.  Certainly Davante Adams will step in as a second-year receiver to help carry the load.  Maybe the Packers won’t find a receiver that can stretch the field like Nelson did.  But with Rodgers, the Packers will find other ways to make-up for what Nelson brought them, if the wide receiver can’t make it back.

Janis took a majority of Nelson’s snaps with the first team while Nelson was recovering from offseason hip surgery.

As expected, the locker room was somber after the game.  But by the time the Packers hit the practice field again on Tuesday, they will have picked up and moved on, again assuming that the report of an ACL tear is accurate.

The players have the day off today and will return to practice on Tuesday.  At the moment, Mike McCarthy doesn’t have any scheduled media session with the media for today.   That means there is a good chance that the first time we all get an update from the Packers on Jordy Nelson’s knee injury might not be until Tuesday.