You are here: Home / Packers / Packers give first team plenty of playing time 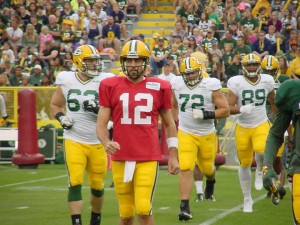 A year ago, Aaron Rodgers, Jordy Nelson and Eddie Lacy sat out the preseason opener at Tennessee.  The Packers subsequently got off to a slow start during the regular season.

Last week, against the New England Patriots, not only did all three of those players start the game, but Rodgers and the first unit played 33 snaps before giving way to the second unit.

Mike McCarthy wants his team to get off to a faster start this season during the regular season and establishing rhythm with the first-team offense could be on the coaches mind.

So how much will Rodgers and the first unit play Sunday at Pittsburgh?

“It’s up to Mike,” Rodgers said.  “Obviously the goal for us is to stay healthy and to find some sort of rhythm.  The preseason has been all over the place.  There’s been years, I remember one year I didn’t get touched in the preseason and the first major season game we has four or five sacks.”

Aaron Rodgers finished last season confined to the pocket after straining his calf in a 20-3 win over Tampa Bay in Week 15.  Now, eight months later, the muscle is fully healed and Rodgers is back extending plays with his feet.