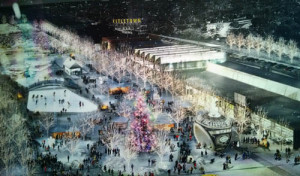 A 10-acre public plaza is the centerpiece of the Titletown District that the Green Bay Packers announced on Thursday. Team President Mark Murphy said the 34-acre development will be anchored by a luxury hotel called Lodge Kohler, a Bellin Health sports medicine clinic, and the Hinterland Brewery and restaurant.

Year-round activities in the park will include a football field in the summer and an ice skating rink in the winter. Murphy sees the Titletown District as an economic driver for the Green Bay area. Packers officials say the initial investment by the Packers, and the three anchor businesses, will be between $120 million and $130 million. The park, and first businesses, should be open by the fall of 2017.