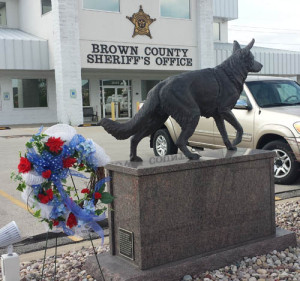 The Brown County Sheriff’s Department has provided a few more details surrounding the death of a police dog last week. Last Wednesday, K-9 Wix died while inside a parked squad car at the PGA Championship in Haven. Wix and his partner, Deputy Austin Lemberger, were conducting bomb sweeps at the golf tournament, under contract with tournament organizers.

Sheriff John Gossage says Lemberger made sure Wix had water, and that the air conditioner was working. The blower motor for the air conditioning failed, along with the car’s K-9 heat alarm. The dog was found unresponsive around 12:30 p.m. and was last checked 47 minutes prior.

During a news conference last week, Captain Dan Sandberg said the squad car’s air conditioning was left on but had quit working after the blower malfunctioned. An alarm that was supposed to sound if conditions became dangerous for the 3-year-old Belgian Malinois also failed. Since the dog’s death, the sheriff’s department has tested its other K-9 heat alarms. All worked when tested. The faulty alarm will be replaced.