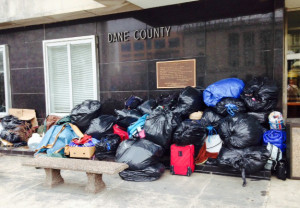 Madison’s mayor hopes to “change some minds” on a major homeless problem in the Capital city’s downtown, particularly outside the City-County building a block south of the state Capitol. Mayor Paul Soglin said it’s a situation that has gotten way out of control.

Soglin said he acted unilaterally to place a portable restroom adjacent to the building – but problems persist. “We are still, on a regular basis, having people unrinating and defecating on the grounds of the building,” Soglin noted. Problems at the building date back for several years. In 2014, hand sanitizer stations some ground floor locations inside the building were removed, after several people become incapacitated by drinking it.

Soglin said efforts to accomodate the homeless have created problems of their own.

“We set up a fenced in area, protected from the elements, for the storage of peoples’ posessions,” the mayor said. That area was closed in July, after just three months. Soglin said people were using the area as a toilet, to have sex and use drugs. “And despite all the other activities, people were sleeping there.

The City-County Liaison Committee has twice rejected new rules proposed by the mayor. The panel is expected to get updated reports from city staff soon, and could reconsider the mayor’s plan in a couple of weeks.

Soglin has also proposed a Downtown Pedestrian Protection Ordinance. It would limit use of benches, ban sitting, lying, or lodging on public rights of way. City Council alders recently overrode his veto to declare the homeless a “protected class” in Madison.