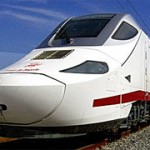 The state of Wisconsin has settled a lawsuit with train manufacturer Talgo. Spanish-based Talgo filed the lawsuit in late 2012 against Governor Scott Walker and Transportation Secretary Mark Gottlieb, over two passenger trains the company manufactured to run between Milwaukee and Chicago.

The Milwaukee Business Journal reports that under the agreement, Talgo will keep the two trains it built for the state, and receive a $9.75 million payment from the state to close out the contract.

Lester Pines, attorney for Talgo, said the firm will attempt to sell the trains, and the state can collect a portion of the revenue from that sale to recoup up to $9.75 million. Walker’s administration cancelled a contract for Talgo to manufacture and maintain four trains shortly after he was elected in 2010. Two were intended for a high-speed passenger rail route between Milwaukee and Madison, the other two for the existing Hiawatha route between Milwaukee and Chicago.