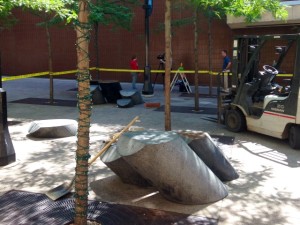 Citing public safety concerns, and acting on a request from the police department, Madison Mayor Paul Soglin on Monday instructed city staff to remove all of the granite and bronze stones in the downtown public art installation known as Philosopher’s Grove.

Positioned at the top of State Street at the intersection with West Mifflin Street, the area and its 44 stones have drawn increased scrutiny from city officials over the past year as business owners and residents have complained about negative behavior around the area, which is adjacent to sidewalks which see heavy pedestrian traffic. In May, 11 of the stones were removed, opening a pathway through the middle of the installation.

This summer, the Madison Central Business Improvement District instituted programming at the site to bring in more activity. Last month, the city approved removal of a bus stop at the corner of West Mifflin Street and State Street. Complaints have cited issues including fights, aggressive panhandling and drug dealing in the area, which is directly across the street from the state Capitol.