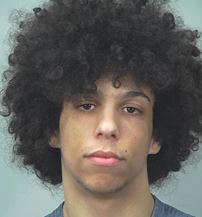 A shocking encounter between two motorists in Madison. The Dane County Sheriff’s Department said 21-year-old James York of Madison used a Taser on another man in a weekend road rage incident. It happened at about 10:15 Saturday night when the victim, a 29-year-old Madison man, was having tire problems and pulled into a PDQ parking lot. His fiancé and daughter were also in the car.

York was exiting the parking lot at a high rate of speed, and his Honda Civic nearly struck the victim’s vehicle. Both men stopped and were exchanging words, when York allegedly pulled out a Taser and shot the victim in the chest. The victim was able to get York’s license plate number. Deputies later made contact with York and arrested him on multiple charges. He is currently being held in the Dane County Jail.