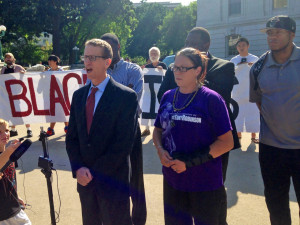 The family of an unarmed, black Madison youth shot and killed by a Madison police officer is filing a federal civil suit against the city and the officer. Chicago civil rights attorney John Loevy, representing the family of Tony Robinson, called the shooting unjustified and cited video from Officer Matt Kenny’s own squad car dash cam.

“You can see on the video that the officer was in no danger, and Tony was presenting no threat to him,” Loevy said during a Wednesday press conference outside the state Capitol. “You can also see on the video that the police officer’s story, that Tony had attacked him the stairwell and he shot him in the stairwell in self-defense, is completely false.”

Kenny was cleared of any criminal wrongdoing following an investigation by the Wisconsin Division of Criminal Investigation. Attorney Loevy said they hope to present this civil suit to a jury.

Andrea Irwin is the mother of the 19-year-old, who Kenny shot seven times in a confrontation last March. She said the civil suit is all she has left. “He will answer, and they will answer . . . for murdering my son, and murdering us over and over again very single day,” Irwin said. “I will not let my son be forgotten, and I will not let this city get away with what they’ve done to him, or to us.”

Jim Palmer, executive director of the Wisconsin Professional Police Association, reiterated on Wednesday that Kenny’s actions were justified. “Given the fact that Officer Kenny was completely exonerated following what was arguably the most extensive and thorough independent investigation of any officer-related death in the history of this state, which was mandated under a new law that no other state in the nation has, I am confident that the City of Madison will not settle this matter under any circumstances,” Palmer said. “While the death of Tony Robinson was tragic and has helped spark a constructive dialogue in Wisconsin on the relationship between law enforcement and the people it serves, Officer Kenny’s actions were completely justified.”

Madison minster, Reverend Everett Mitchell, said the city can’t be allowed to forget Tony Robinson. “Because when they forget, then there will be no changes. When they can go back the lakes and go back to the bikes paths and go back to life as normal, then they will forget that on Williamson Street, a young man was tragically killed.”