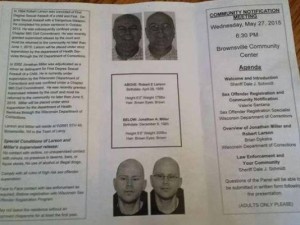 A North Fond du Lac woman whose brother was living next to two high risk sex offenders says the family was relieved to see both offenders sent back to a state treatment facility. Dodge County judges decided to send Chapter 980 offenders Robert Larson and Jonathan Miller back to the Sand Ridge Secure Treatment Center.

Aileen Andrews’ brother Brian Edwards lives in Brownsville within 250 feet of where the two offenders were placed in June. Edwards is raising 11-year-old twins, a boy and girl. His wife died 3 years ago of a brain aneurysm. Andrews said her brother didn’t know about the placement until a sheriff’s deputy came around to inform him about a community meeting. “You don’t put a kid in a candy store, an alcoholic in a bar,” Andrews said. “Why would you put a high risk sex offender in a home next to kids?”

Authorities were not aware two young children were living next door to where the sex offenders were being released. Andrews said the country is actually a good spot to place sex offenders because of the seclusion, but not in this case. She said the community took time to make an issue of the placement, and made history with what was accomplished. “It can be done. It’s a challenge, but ‘it takes a village,’ and a village definitely pulled together.’ s one person said She says as one person put it, “It takes a village to live in Brownsville” and the village pulled together. Larson and Miller will eventually be placed in Dodge County.

Edwards, in a thank you note to the community, said “this removal shows how strong and committed our small communities are to keep our children and neighborhoods safe.”