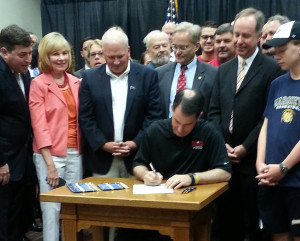 Calling it a “dynamic new addition” to the city of Milwaukee and the state, Governor Scott Walker this morning signed legislation that provides about $250 million in public financing for a new NBA arena in Milwaukee.

Walker was surrounded by lawmakers, team officials, and local government leaders, as he signed the bill during a ceremony at State Fair Park in West Allis. The governor touted the economic benefits the plan is expected to bring, with the addition of the $500 million sports entertainment district in downtown Milwaukee.

Walker noted that the state could have lost at least $6.5 million a year in income taxes from players’ salaries, if the NBA followed through with a threat to relocate the Bucks if a new arena is not built. “If we didn’t take this path, we’d be looking at a $6.5 million dollar hole…which would be obviously a negative impact on future budgets,” Walker said.

The plan calls for an overall investment of $250 million in taxpayer funds, which is projected to be closer to $400 million once interest is factored in. The state’s share is capped at $80 million over the next 20 years, with southeastern Wisconsin officials covering the rest of the costs.

Several Democratic votes were needed to pass that bill through both chambers, amid concerns from some Republicans that taxpayer dollars should not be used on what’s essentially a private sports facility. Walker said it was “a good example where people came together, not just across party lines, but from many different places in Wisconsin.”