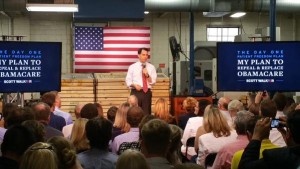 Republican presidential hopeful, Wisconsin Governor Scott Walker was in Minnesota Tuesday, announcing his proposal to do away with the Affordable Care Act if he’s elected president. He said it’s a simple plan: “it starts out with the premise that on my very first day, I will send legislation to the Congress to once and for all repeal Obamacare entirely.”

Walker said his “Day One Patient Freedom Plan” would lower insurance premiums by eliminating regulations in the ACA. And it would remove the mandate that everyone purchase insurance. “And then along with that, we’re gonna replace it in a way that puts patients and your families back in charge of your healthcare decisions. Pretty simple idea.

Walker made the announcement at Cass Screw Machine Products in Brooklyn Center, a Twin Cities suburb.

Walker said he’ll give Congress incentives to go along with the proposal. “The great way to motivate the Congress to pass the reforms that we’re talking about is to make sure they have to live under the same Obamacare rules that the rest of America’s been put under over the last few years, right?”

“Walker’s supposed plan is not serious health policy. It is a campaign document which provides nothing more than window dressing for a massive roll-back of the freedom to access quality affordable health care,” said Robert Kraig, Executive Director of Citizen Action of Wisconsin. “The American people are tired of the constant efforts to undermine health care reform. It’s time to recognize that the health care law is here to stay. Rather than going backwards, we need to work together to make the law better and lower costs.”