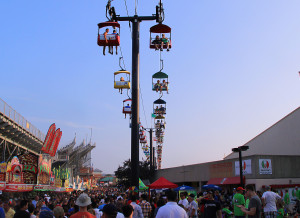 The 164th Wisconsin State Fair is underway, after opening its gates this morning to visitors.

On Aug. 11, high wire artist Nik Wallenda will attempt a world record longest tightrope walk at State Fair Park. There’s also a sea lion show three times a day, which is a first for the fair.

Chuckel says food fans will have plenty to choose from this year, with over 100 new items added to the menu. Bacon features heavily in several of those creations, including pizza with a bacon crust, bacon cinnamon rolls, and a 50-50 burger – a burger made of half beef and half bacon. Of course, the iconic cream puff will also be available.

The fairs runs from August 6-16 at State Fair Park in West Allis.