You are here: Home / Legislature / Assembly Democrats look to ‘bring back the middle class’ 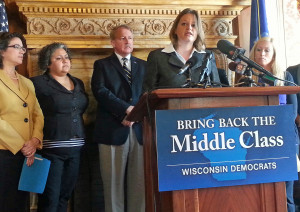 Minority Democrats in the state Assembly are offering a series of bills they say are aimed at strengthening the middle class in Wisconsin.

During a Capitol news conference on Wednesday, Assistant Minority Leader Katrina Shankland (D-Stevens Point) said the proposals target issues that are making it harder for families to get by. They include legislation that would create a childcare tax credit, make it easier to refinance student loan debt, allow workers to earn sick leave, and create a state-backed retirement system for the public.

The Stevens Point Democrat said “these are real issues that people in Wisconsin every single day face and worry about and hope for action…Republicans have had an opportunity to lead on these issues, but they’ve sat back and done nothing.”

The proposals include a mix of new legislation and bills introduced earlier this year, which have yet to receive public hearings. Their chances of advancing this session are unlikely, with a spokeswoman for Assembly Speaker Robin Vos (R-Rochester) calling them part of a “tax-and-spend agenda.” Kit Beyer said “Once again their only ideas are to spend hundreds of millions of dollars, which will come directly out of the pockets of the hard-working families of this state. The Assembly Republican agenda for this session prioritizes education, job training and fighting fraud and abuse in government programs.”