You are here: Home / Badgers / Badgers have to put Alabama loss behind them 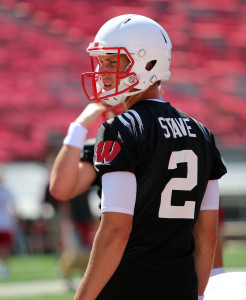 The Wisconsin Badgers dropped their season opener 35-17 to Alabama in Arlington, Texas on Saturday night.  Today, the Badgers have so put the pieces together and get ready for their home opener against Miami of Ohio on Saturday morning at Camp Randall Stadium.

The Badgers are hoping to get their injured players back soon.  Safety Michael Caputo suffered a head injury on the fourth play of the game.  Tailback Corey Clement had suffered a groin injury Tuesday, was limited to eight carries for 16 yards before leaving for good.  Inside linebacker Leon Jacobs, who dislocated the big toe on his right foot in camp, struggled and was eventually taken out in the second half.

Badger coach Paul Chryst said, “There’s some areas that clearly we’ve got to improve upon for us to be the team that we want to be.  I think we’re going to look at the film and see some areas where I think we can build on.”

It’s too soon to determine whether or not Caputo, Clement and Jacobs will be ready to face Miami on Saturday.

Wisconsin quarterback Joel Stave played well, completing 26 of 39 passes for 228 yards and two touchdowns.  But it was expected the Badgers offensive line would have trouble with Alabama’s front seven and that was clearly the case.  The Badgers normally potent running game, managed just 40 yards on 21 carries.