You are here: Home / Badgers / Badgers open up against Alabama, looking for more takeaways 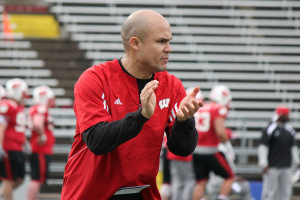 Last season, the Badgers forced a total of 17 turnovers.  We’ll see tonight, when the Badgers open their season against 3rd-ranked Alabama, if all of the emphasis and work during the offseason has paid off.

Lack of Takeaways isn’t the only issue for the Badgers.  In fact, going into the season opener tonight, it pales in comparison to Wisconsin’s banged up offensive line.

Injuries during fall  training camp has forced offensive coordinator Joe Rudolph to shuffle the deck repeatedly, trying to find the five best players to line up against the Crimson Tide.

Center Dan Voltz (20 starts) and left tackle Tyler Marz (27 starts) are the only two offensive line starters that have started a college football game previously.  It is precisely what makes this season opening game against Alabama most difficult for the Badgers.

Alabama’s defensive front seven is one of the best, if not the best, front seven’s in all of college football.  The Badgers didn’t even settle on their number-1 offensive line until this week.  That spells trouble for Bucky and it makes the Badgers the underdog that they are.

This is just the second all-time meeting between the two schools.  The Badgers won the only contest played back in 1928, 15-0.

Paul Chryst makes his Badger head coaching debut tonight.  He is 19-19 as a head coach in Pittsburgh.

Alabama coach Nick Saban is 4-1 against the Big Ten.  His only loss came to Ohio State, last season (42-35) in the College Football Playoff semifinals.