You are here: Home / Legislature / Bill would require rear-facing car seats for kids under 2 in Wisconsin 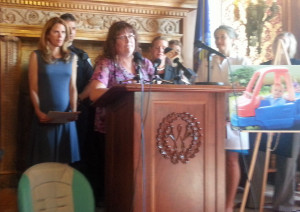 A bipartisan bill being circulated at the Capitol would require children to ride in rear-facing car seats in vehicles until they are at least two-years-old.

Current state law only requires rear-facing seats to be used until a child is one or if they weigh more than 20 pounds. Libby Slavin with Safe Kids Wisconsin says the two-year standard is more in line with what the American Academy of Pediatrics and National Highway Traffic Safety Administration recommend. She says “a child 12-24 months old is five times safer riding rear-facing, than reversing that car seat forward-facing at one year.”

Bethany Olson of Elmwood says the decision to ignore the state’s current one-year standard likely saved the life of her 14-month-old daughter when they were in a bad crash. A cattle truck t-boned her vehicle after running a stop sign, crashing into the side of the vehicle where her daughter was seated. Olson says “everyone on scene said we all should have been killed, especially my children. They also said that had my daughter been forward facing, she would have been killed. Not following the law saved her life.”

The bill’s sponsors call it a common sense proposal that will help save the lives of children.