You are here: Home / Brewers / Brewers score seven in the 9th to beat Cardinals 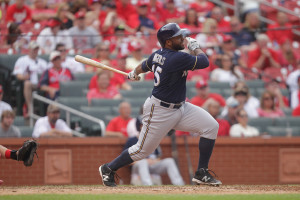 The Brewers victory tightened things up at the top of the National League Central.  The Cardinals lead on the Pittsburgh Pirates is just three games with the two teams set to begin a three-game series  tonight in Pittsburgh.

Rogers has not only been one of the Brewers top pinch-hitters this season, but he entered the game hitting .468 over his previous 25 games.  He turned a 3-1 Brewers deficit into a 5-3 lead by clubbing a 97-mph fastball from Rosenthal over the center field wall.

It was the first pinch-hit grand slam by a Brewers player in the ninth inning since Don Money on July 3, 1977, and the fifth overall in team history.

Davis has a team-leading 26 homers this season.  Six of the 26 have come against the Cardinals.

The Brewers have the day off today.  They’ll open a 3-game series against the Padres in San Diego on Tuesday night.