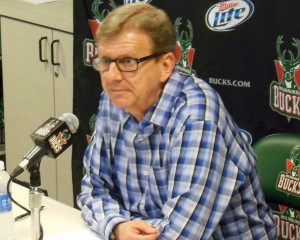 Milwaukee Bucks’ general manager John Hammond has been given a one-year contract extension.

There has been speculation for some time that the 61-year-old would be on the way out after the new ownership came in a year ago and that new coach Jason Kidd could be in charge of personnel.  But co-owner Wes Edens says Hammond’s vision and hard work was a main reason the Bucks did better than expected last season, with a .500 record and a playoff appearance.

Hammond is entering his eighth season with the Bucks.  He said they have a long way to go to become the “elite” team the Bucks want to be.

Hammond said it’s key that he and Jason Kidd have built up a “great amount of respect” for each other.

Both Hammond and Kidd now have contracts that run through mid-2017.

Hammond was named the N-B-A’s executive of the year in 2001, the last time the Bucks advanced past the first round of the playoffs.  Now, the team is building a young core, and they scored a major coup this summer when they signed free-agent center Greg Monroe.

Meanwhile, Bucks’ assistant G-M David Morway will not return.  He spent two years in Milwaukee, after serving as the G-M at Indiana.