You are here: Home / Packers / Bulaga to miss Sunday’s home opener against Seattle 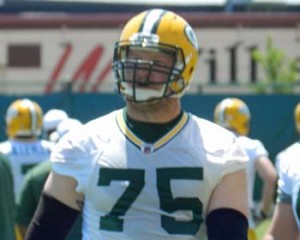 Bulaga left Thursday’s practice during individual drills and trainers were looking at his left knee.  He was replaced in practice on by Don Barclay, who is expected to start Sunday night against Seattle.  The Packers could also go with Josh Walker, a street free agent who was signed to the Packers’ practice squad in September of 2014 and was active in last Sunday’s season opener at Chicago.

Barclay started a career-high 14 games at right tackle in 2013 and has made a total of 18 regular season starts at that position during his career.  He told reporters late Thursday that he’s had plenty of reps at right tackle and right guard and feels fine.

Walker spent most of the preseason backing up Bulaga when Barclay was being moved to the left side to fill in for David Bakhtiari.

Bulaga is expected to be out for at least this week.  He is still going through the evaluation process.  It is the same injury that he suffered last year in the season opener and returned after missing one game..

The six-year veteran blew out the same knee in August of 2013 and missed the entire season.  Last season, Bulaga credited the brace he was wearing with saving him from another serious knee injury against the Seahawks.  Instead of a season ending injury, he missed one game with a sprained MCL.

Bulaga signed a five-year, $33.75 million contract during the offseason, avoiding a trip into free agency.