You are here: Home / News / Flags in Wisconsin ordered to half-staff in honor of Justice Crooks 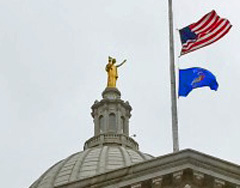 Governor Scott Walker has ordered flags to be flown at half-staff, in honor of state Supreme Court Justice Patrick Crooks.

The 77-year-old Crooks died suddenly Monday at the state Capitol building. The Dane County medical examiner says it was from natural causes, but a specific cause of death has not yet been released.

Walker this morning signed an executive order for the U.S. and State of Wisconsin flags to be flown at half-staff in Wisconsin through the date of Crooks internment.

The governor said in a statement that Crooks “demonstrated his commitment to the citizens of Wisconsin through his service on the state Supreme Court,” as a Brown County judge, and as a former officer in the U.S. Army. Walker said “I am deeply sorry to hear of his passing” and offered prayers to his family and friends.

Members of the state Supreme Court were back in session Tuesday morning to hear a case, with Crooks’ robe draped over his empty chair. Justices held a moment of silence to honor their colleague, before proceeding with oral arguments.