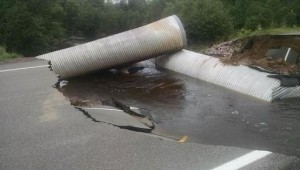 West central Wisconsin is bracing for another round of heavy rain today, after parts of the region were flooded with up to eight inches of water since Sunday. The area could see another one to two inches of rain today.

According to Wisconsin Emergency Management, a home and a family farm had major flood damage at Eleva in Trempealeau County — where six-inches fell on Monday. Three people were stranded until today after a dead-end road was flooded in Jackson County. Several residents in the Clark County town of Seif were also stranded when a culvert washed out along a town road.

More rain is forecast for most of Wisconsin today, but there’s only one flood warning still posted. It runs until at least tonight on the Black River at Black River Falls, which was almost three-feet above its flood stage as of Monday evening.