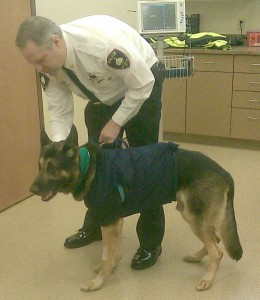 A Fond du Lac police dog who survived being shot twice during an incident four years ago has been euthanized. Grendel’s former partner, Officer Ryan Williams, said the decision to let the 12-year-old German Sheppard go was difficult, but became necessary due to his declining the health.

The dog continued to surfer from nerve damage in his back and bowels after he and Williams were shot in March of 2011, during a standoff that claimed the life of Fond du Lac Police Officer Craig Birkholz. The suspect in the case later died from a self-inflicted gunshot wound.

The recovery of the pair became a point of hope for the community, following Birkholz’s death. Williams said Grendel “really kind of inspired people…motivated people…during that hard period of time that this whole town went through.”

Williams and Grendel were both back on the job three months after the shooting. The dog retired in April of last year, while Williams remains with the force.

Grendel was buried Wednesday at Rienzi Cemetery, where other police dogs are interred. While he was eligible for a funeral with full police honors, Williams said they kept the ceremony private.