You are here: Home / Packers / Hundley is lights out in the preseason 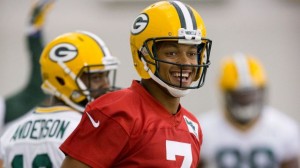 The Green Bay Packers traded up to select UCLA quarterback Brett Hundley in the 5th round of the NFL Draft.  After four preseason games, they’re glad they did.

Hundley admits things started slow early on, but he got a full grasp of the offense and had a preseason to remember.

In four games, Hundley completed 45 of 65 for 630 yards.  He threw seven touchdowns and only one interception.  His quarterback rating of 129.6 was by far and away the teams best.  It will also rank among NFL leaders as well.

Hundley secured his spot on the roster with 315 passing yards and two touchdowns in the loss to the Eagles.  Last night against the Saints, Hundley followed up his game three performance and proved that he could do it again.

Some talk radio shows are likely to start discussing whether or not Hundley should surpass Scott Tolzien for the number-2 quarterback job.  That isn’t likely to happen, but Hundley’s performance certainly warrants discussion.  Tolzien is in the final year of his contract and Hundley’s performance could allow the Packers to at the very least, make the move to number two for next season.

For now, Hundley will sit back and learn, just like Aaron Rodgers did when he first arrived in Green Bay.