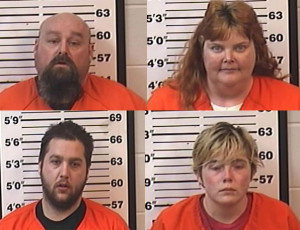 A Forest County man will spend more than two decades in prison for his part in the brutal beating of a man who was left to die on a frozen snowmobile trail last year.

A judge sentenced 46-year-old Raymond Jones to 24 years in prison and 16 years extended supervision for the beating of the man at a home in Wabeno in March of 2014. He was convicted on eight counts, including an attempted first-degree intentional homicide charge.

Jones and three others were accused of beating the man over the course of several days, in what was described as retaliation for allegations that he had inappropriately touched a child. After the beating, the man was taken to a trail near Crandon and was left in the hope wolves would find him. The 41-year-old man survived, but sustained fractures to his face, a broken nose and jaw, and two broken ribs. Prosecutors said the claims the man touched a child were unfounded.

The other defendants in the case have already been sentenced. Justin Bey was given 18 years in prison, April Jones received nine months in jail, and Samantah McClellan was given 18 months probation. The four are also responsible for paying more than $40,000 in restitution to the victim.