You are here: Home / Brewers / Jungmann struggles as Brewers fall to Cardinals 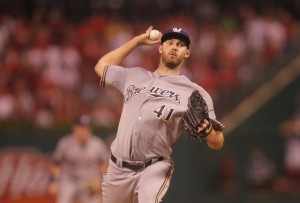 Jhonny Peralta and Stephen Piscotty combined for seven RBI to lead the St. Louis Cardinals to a 7-3 come-from-behind win over the Milwaukee Brewers in their series opener in St. Louis on Thursday night.

The Cardinals trailed 3-0 in the fourth when Peralta clubbed a three-run home run to get the ball rolling for the Cardinals.  Piscotty followed with a home run of his own.

Taylor Jungmann took the loss for the Brewers, roughed up for the third time in five starts this month.  Jungmann allowed six runs on six hits with three walks and five strikeouts in five innings.

Jungmann (9-7) fell to 1-2 with a 7.71 ERA in five September starts.  He’s given up five or more earned runs three times and a total of seven home runs after allowing only three in his first 15 starts.

The Brewers scored three runs in the first off of St. Louis starter Michael Wacha (17-6).

Jason Rogers drove in the Brewers first run with an RBI single and Hernan Perez drove in the other two runs with a two-out double.

Game two of the four game series is tonight.