You are here: Home / Packers / Lang will be lighter in the wallet this week 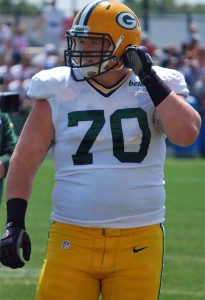 Green Bay Packers guard T.J. Lang was punished for his role in a scuffle during last Sunday nights game against the Seattle Seahawks at Lambeau Field.

Packers tight end Richard Rodgers was on the ground, tussling with linebacker K.J. Wright when Lang came to Rodgers defense.  Lang knocked Wright off of him.

Lang and Wright both received unsportsmanlike conduct penalties and Wright was ejected from the game.

On Wednesday, Lang posted on Twitter:  “$8,681.  Price of defending your teammate in the NFL.”

The NFL doesn’t comment on fines until the Friday following a game.  There’s no word from Lang on whether or not he will appeal the fine.