You are here: Home / Crime / Courts / Litterer caught on “can” did camera 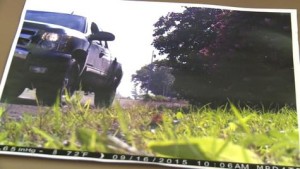 An image shows the truck believed to be the source of the cans. (Photo: Marshfield Police Department camera)

After nearly a year of picking up beer cans in his yard, a Marshfield homeowner went to the police for help.

Greg Canfield told police he was getting tired of cleaning up around six empty Busch Light beer cans from his yard every week. Marshfield Police officers set up a camera to catch who was leaving them behind, which snapped a picture of the drive-by can tosser and the license plate on his truck.

Police traced the truck to 48-year-old Todd Kopf. When confronted, Kopf admitted to officers he was throwing the cans on his way home from work. He was issued three separate littering citations for $124 dollars each.

Canfield told police he hasn’t had anymore cans to cleanup since they caught Kopf.