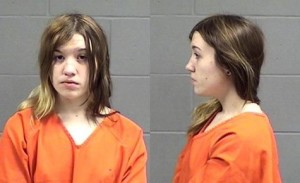 There is a delay in the case of a Oneida County teenager accused of killing her mother and step-father. Seventeen-year-old Ashlee Martinson is accused of stabbing her mother Jennifer Ayres over thirty times, and shooting her step-father Thomas Ayres execution style last March.

Martinson fled the state and was brought back from Indiana to face the double homicide charges. She’s pleaded not guilty by reason of mental disease or defect. In court Monday, public defender Amy Ferguson said more time is needed to evaluate Martinson’s mental competency, due to the seriousness and complexity of the case, and the large volume of materials involved.

Oneida County Judge Michael Bloom granted the extension until December 1st to have the competency report ready. A status conference is set for December 11th.

Martinson and her 22-year-old boyfriend Ryan Daniel Sisco were located by police traveling on Interstate 65 near Lebanon, Indiana just north of Indianapolis the day after the crime. Sisco is being charged with probation violation, but is not facing charges for the slayings of the Ayres.