You are here: Home / Badgers / McEvoy leads Badgers to victory 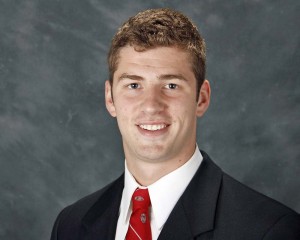 Two Wisconsin defenders, linebacker Leon Jacobs and defensive back Derrick Tindal, were ejected in the game for targeting.

Senior quarterback Joel Stave  threw for one touchdown and passed for another.  He finished 13-of-17 for 202 yards.

Dare Ogunbowale had Wisconsin’s other touchdown.  The ground attack was improved, but still fell short of 200 yards.

Defensively, the Badgers continued to be stingy.  For the second straight game, the Badgers failed to give up a touchdown.

The game was delayed after a heat detector near a pizza oven set off the fire alarm with about nine minutes left to play in  the game.

The Badgers improved to 2-1 and will host Hawaii next Saturday night at Camp Randall.