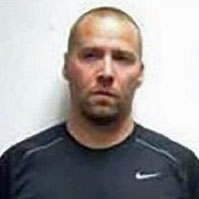 The Brown County Sheriff’s Department has issued a nationwide felony warrant for a Green Bay man. Forty-year-old Anthony “Tony” Salmon is on parole for second-degree sexual assault. The sheriff’s department said Salmon cut off his monitoring bracelet on September 18 and skipped parole.

While his whereabouts are unknown, deputies said Salmon has close family ties in Wisconsin Rapids and Anthem, Arizona. He may also have ties in Florida. Law enforcement also are concerned for Salmon’s girlfriend, 27-year-old Nadine Crowley. Crowley’s mom told police her daughter contacted her on September 17 saying she was scared and that her boyfriend, Salmon, “was acting weird.”

Crowley is believed to be traveling with Salmon, and family members believe he’s controlling her actions and that she’s in danger. Salmon is most likely driving a black Jeep with possible Delaware plate, 601543, red-trimmed interior and removable hardtop. The vehicle has a spare tire mounted on the back.

Salmon is described as white, 5’9”, 160 pounds with blue eyes and a tattoo on his right inside forearm. He also has a tattoo of a tribal sun on his back, extending onto the back of his neck. He has been known to have facial hair. Crowley is described as white, 5’10”, 130 pounds with brown shoulder-length hair and hazel eyes. She has a piercing on the left side of her nose. There are no warrants or criminal charges for Crowley.