You are here: Home / Packers / Packers reduce roster to 75 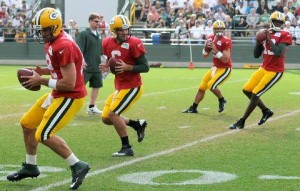 The Green Bay Packers reduced their roster to 75 players on Tuesday afternoon.  Among the cuts is former UW-Whitewater quarterback Matt Blanchard, who performed well enough to win the third quarterback job behind Aaron Rodgers and Scott Tolzien.

Blanchard’s fate was sealed however when the Packers selected UCLA quarterback Matt Blanchard in the fifth round of the NFL Draft.  Packers general manager Ted Thompson rarely cuts draft picks and Hundley cemented his spot on the roster with a good performance against the Philadelphia Eagles last Saturday.

Blanchard completed 8 of 11 for 87 yards and a touchdown against Philadelphia in the fourth quarter.  Packers quarterbacks coach Alex Van Pelt said Blanchard is very bright and has a future as an NFL player.

The Packers also placed wide receiver Jordy Nelson on injured reserve, officially ending his season.  Nelson tore his ACL in the second preseason game against the Pittsburgh Steelers.  He has yet to undergo surgery.

The Packers will host the New Orleans Saints in the final preseason game on Thursday night (6pm) at Lambeau Field.  They’ll open the regular season a week from Sunday at Chicago against the Bears.