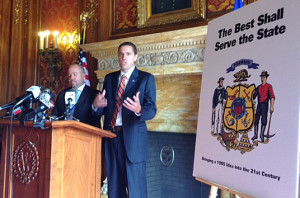 Numerous of changes could be in store for Wisconsin civil servants and job applicants for those positions, under legislation being worked on at the Capitol.

The proposal, from Assembly Majority Leader Jim Steineke (R-Kaukauna) and Senator Roger Roth (R-Appleton), seeks to make a long list of reforms to the civil service system, which range from eliminating the current exam-based hiring process to making it easier to fire state workers. At a news conference Thursday announcing the plan, Roth called the changes “plain and simple recruitment, retention reforms” which are designed to help the state attract and keep top talent.

However, critics are already raising concerns that they could make it easier to inject politics and cronyism into the state workforce and its 30,000 civil service positions. In a statement, AFSCME Council 32 executive director Rick Badger said “These rules exist to ensure state employment decisions are based on what you know, not who you know.”

Governor Scott Walker expressed support for the plan, saying that “Wisconsin needs to be able to compete for the best and the brightest employees in today’s modern workforce. This legislation will implement common-sense reforms to our recruiting process to get the best in the door and will give state agencies the tools to retain their great employees, as well as to address the bad actors who abuse the system.”

The final details of the legislation are still being worked out, but Steineke and Roth outlined several specific concepts on Thursday. They include switching to a resume-based hiring process for seeking job applicants, instead of the exams the state currently relies on for most civil service jobs. Steinke claimed those exams are of little value anymore because people have learned how to “game” the system to get job interviews by making sure to include certain key words. Roth also noted that the system is an “archaic process” that the private sector moved away from some time ago.

Other aspects of the bill include:

The bill also seeks to define what “just cause” is for firing workers. Roth offered the example of a state worker who had been caught watching pornography on his state computer for over four hours a day, but whose termination was rejected because supervisors never told him it was “frowned upon.” He argued eliminating those gray areas would give more stability to state workers.

Assembly Democratic Leader Peter Barca said those kinds of examples are clearly situations where workers should be fired, but he also argued that such cases are likely being offered up as a “red herring” to build support for the reforms. Once the final language of the bill is released, he predicted Republicans “will take and have one of the most extreme, right wing approaches to civil service.”

Roth said they hope to release the full bill by next week.