You are here: Home / News / Ryan taking a pass on House Speaker’s job 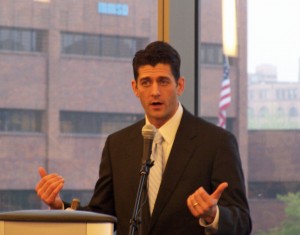 Wisconsin Congressman Paul Ryan won’t make a move for the Speaker’s office. Ryan, who’s represented Wisconsin’s 1st Congressional District since 1999, said there are a couple of reasons why he’s not interested in succeeding John Boehner. “This is a job where you are expected to be on the road about a hundred day a year,” Ryan said. “Our kids are 10, 12 and 13, and I’m not going to do that.”

The Janesville Republican is also happy where he is. “I think I can do a lot of good, for the country and for the state of Wisconsin, as chairman of the House Ways and Means Committee,” he said. “It’s in charge of the issues I care great deal about. Moving people from welfare to work, fixing the health care law, preventing the debt crisis by reforming entitlements and fixing the tax code.”

Like the other GOP members of the state’s congressional delegation, Ryan said he was caught off guard by Boehner’s decision last week to leave Congress at the end of October. Ryan said the next House Speaker will have to unify Republicans, calling that “priority number one” for whoever succeeds John Boehner, “So that in this divided government era and moment we are in, we can make a positive difference and gets things done for the people that sent us to Washington . . . to fix problems.”

The consensus choice to take over for Boehner appears to be Representative Kevin McCarthy of California. Ryan said McCarthy is a strong position – but the job is a challenging one. “It is all tall order for whoever succeeds the Speaker, and I think Kevin has the temperament and the personality and the qualifications to do that.”