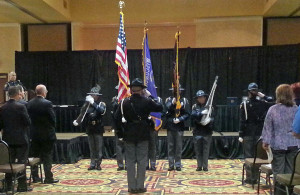 The Wisconsin State Patrol has awarded its top honors on Trooper Trevor Casper, who was killed in the line of duty earlier this year. During a ceremony in Middleton Monday, Casper was awarded a posthumous Medal of Valor and Purple Heart.

Casper, a 21-year-old from Kiel who had been with the State Patrol for just eight months, was killed on March 24 in a shootout with a bank robbery suspect in Fond du Lac. Casper had been following the man, when the suspect opened fire. Despite serious injuries, he was able to fatally shoot the suspect before dying himself.

State Patrol Lt. Colonel J.D. Lind said Casper’s “courageous actions spared the citizens of the state of Wisconsin and his fellow officers from the dangers of a violent criminal, who would not hesitate to kill to evade arrest.

Casper’s family was on hand to accept the awards in his honor, which were presented by Governor Scott Walker.

Purple Hearts were also given to three other troopers killed in the line of duty since the 1970s, while about two dozen more State Patrol employees were recognized with other commendations.